A recent study by Italian economists revealed that the richest families in Florence today are the same as they were in 1427. That’s just one of the ways that this incredible city hasn’t changed in hundreds of years: the skyline is still dominated by the gobsmacking fifteenth-century dome of Santa Maria del Fiore, the museums are packed with world-famous Renaissance art produced virtually around the corner, and the tourists who’ve been flocking here since the eighteenth century outnumber Florentines every summer.

After a long day spent in the beautiful natural areas all around this blissful city it’s good to chill a little and before the late dinner (which is very common in Italy and other Southern European countries) do a bit more sightseeing. Why not to spend your free time in these interesting interal destinations?

The museum is organized as a long labyrinth of rooms with amazing works of art displayed roughly in chronological order along a U-shaped Renaissance building which was never created to be a  museum. Cosimo de’ Medici had entrusted his favorite architect Giorgio Vasari to create a grandiose building right next to Palazzo Vecchio, the seat of power, to host the magistrates, the seats of the Florentine Guilds, a vast theatre and judiciary offices (hence the name ,,Uffizi’’ which means offices in Italian).

This is so you understand that these spaces were not ,,born’’ as a museum nor inteded to welcome up to an average of 10.000 people a day, which they do now. The halls of the top floor of the Uffizi at first were only accessible to the Grand Ducal family, servants and only a few select guests where the family started to place the many pieces of their personal private collections. Guests were welcomed on the top floor to admire the grandiose collection of Roman sculptures the Medici loved to collect.

The art-fond Medici family also collected manuscripts, gems, coins and cameos over the centuries. With Francesco I, there is the first private room dedicated to items that were ,,any kind of wonder” which they thought were interesting objects. Buontalenti created for Francesco I an octagonal shaped Tribune to host his favorite works of art and jewels: the Tribune is considered the most ancient and precious heart of the Uffizi, still maintaining its original shape from its construction in 1584.

The concept of ,,museum” will be developed much later by Peter Leopold of the Lorraines in 1769, when he opens the Uffizi Gallery and its treasures to the public. He would have never imagined that it would become one of the most frequented museums in the world. Serious art lovers should visit the Uffizi at least twice to see all of it!

The Cathedral of Saint Mary of the Flower, better known as Il Duomo di Firenze, is famous for its massive dome – the largest in the world until 1881. If you don’t mind 463 steps and some tight spaces, clamber up inside for a great view of the city from the lantern at the very top: the highest point in central Florence. If you’re not yet out of puff, then the adjacent Giotto’s Campanile (bell tower) offers another spectacular view and a great perspective on the Duomo itself.

Stroll over to the San Lorenzo district, dodge the trashy stalls of the San Lorenzo market and instead duck inside the nineteenth-century Mercato Centrale for two floors of foodie catnip. Ground level is a conventional marketplace with vendors selling wine, fruit, meat, fish, cheese, oil and spices, while the upstairs food court is a handy stop-off for breakfast and coffee orsnacks and an aperitivo at – shock, horror – decent prices.

One of Florence’s many contradictions: though there are more historic works of art in the Galleria dell’Accademia than you’ll find in most entire cities, the queue that forms outside every day is here for one thing only. David stands seventeen feet tall, and he’s been endlessly replicated and parodied since the 26-year-old Michelangelo carved him out of a single hefty block of marble 500 years ago. Wait in line and check out his famous curves in person. He’s worth it.

Nowadays, the Pitti Palace houses some of the most important museums in Florence: on the first floor is the Palatine Gallery, containing a broad collection 16th and 17th century paintings, and the Royal Apartments, containing furnishings from a remodeling done in the 19th century; on the ground floor and mezzanine the Silver Museum (Museo degli Argenti) displaying a vast collection of Medici household treasures; and the Gallery of Modern Art is on the top floor, holding a collection of mostly Tuscan 19th and 20th century paintings. In the separate Palazzina del Cavaliere on the upper slopes of the Boboli Gardens is the Porcelain Museum, while the Palazzina of the Meridiana contains the Costume Gallery, a showcase of the fashions of the past 300 years.

Is time travel possible? At Palazzo Vecchio it is, with a trip back into history to three eras. Palazzo Vecchio offers Roman ruins, a Medieval fortress and amazing Renaissance chambers and paintings. A microcosm where art and history have been indissolubly bound for centuries.

Palazzo Vecchio is the main symbol of civil power for the city of Florence, whose original project is attributed to Arnolfo di Cambio. Construction on the solid fortress began in 1299 above the ruins of the destroyed Uberti Ghibelline towers, testimony of the final victory of the Guelph faction.

Palazzo Vecchio’s current appearance is due largely to great works of renovation and interior decoration that were made around 1540, when Duke Cosimo I de’Medici and his wife Eleonora of Toledo decided to turn the palace into their residence. The court of the Medici was transferred to Palazzo Vecchio (from Palazzo Medici-Riccardi), which was transformed into a fascinating labyrinth of institutional chambers, apartments, terraces and courtyards. All the rooms (the so-called Quartieri Monumentali) are magnificently decorated by artists such as Michelangelo, Giorgio Vasari and Donatello. 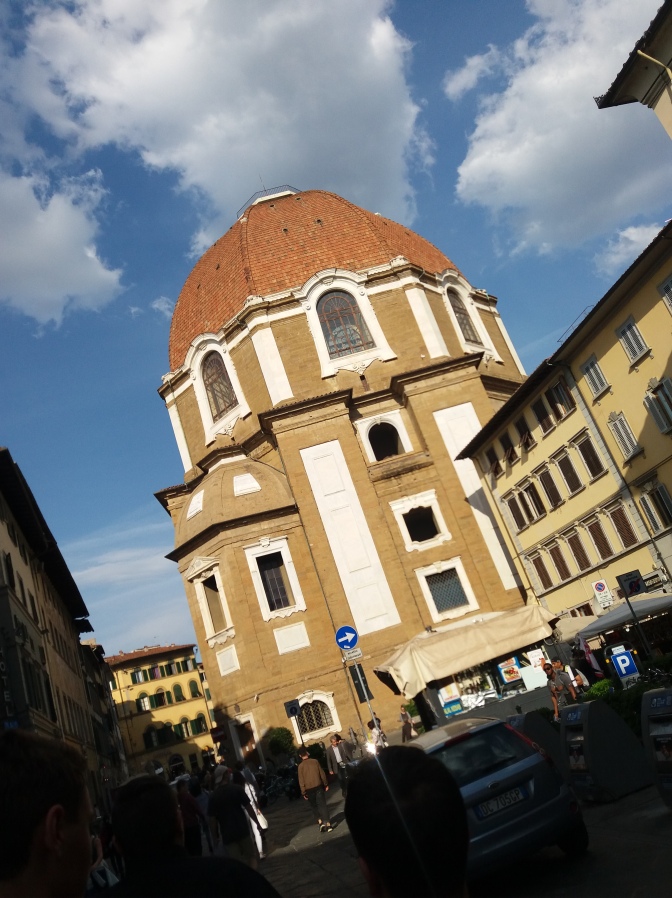 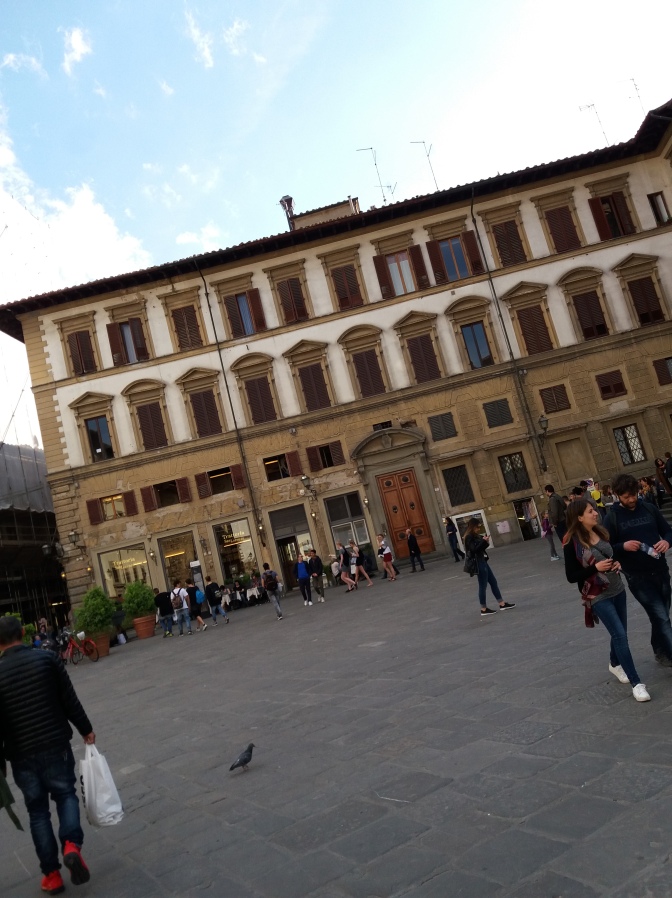 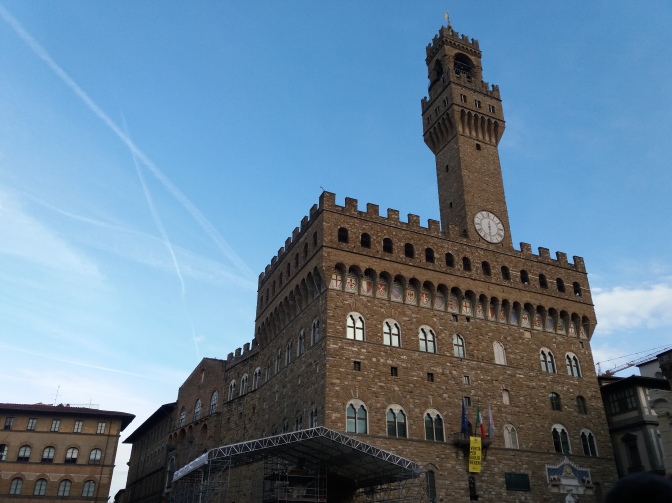 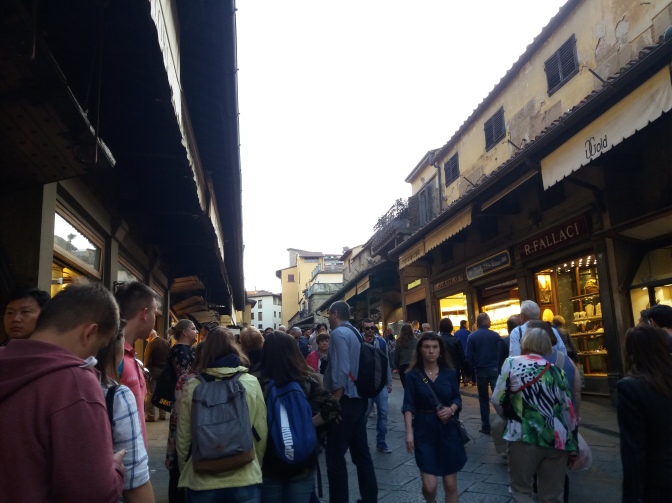 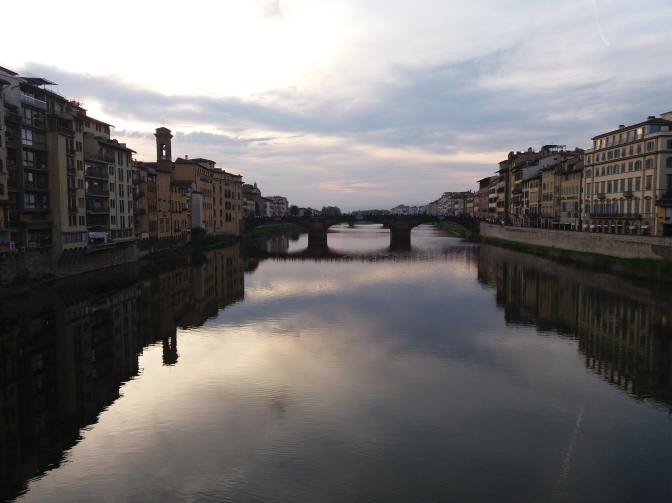 One thought on “Unusual evening in Firenze”