Basking in the sun of the French Riviera, Cannes sparkles with glamour and exclusivity.

This legendary seaside resort has all the glitz and allure of the Côte d’Azur: private beaches, marinas filled with luxury yachts, stylish boulevards, elegant Belle Epoque hotels, and fashionable restaurants. In an enchanting setting on Golfe de la Napoule bay, Cannes is blessed with a balmy Mediterranean climate. The weather is mild year-round and perfect for sunbathing by the beach from May through October. Leafy palm trees grace the streets of Cannes, and subtropical flowers flourish throughout the city, giving visitors the impression of being in paradise. The prestigious Film Festival of Cannes has been an important event since it began in 1946. Drawing famous movie stars from around the world, this annual red-carpet gala has earned an international reputation for promoting the art of filmmaking.

Glamorous Cannes is more about resting than doing. There’s surprisingly little to do in Cannes itself – no vital gallery, outstanding historical monument or particularly vibrant memories of great former residents. How ideal. Although you can visit a few museums and see some pretty architecture, the main tourist attraction is enjoying life at a leisurely pace. It releases the visitor to do what he or she really wants to do – which could be a stroll along a vast promenade, an exploration of the sinuous labyrinth of streets in town or a boat ride to two off-shore islands. Anyways, here are a few things you should definitely see and experience there.

One of the most fashionable streets on the French Riviera, this palm-lined boulevard is the center of tourist activity in Cannes. The Boulevard de la Croisette is lined by Belle Epoque hotels, such as the historic InterContinental Carlton Cannes, a marvelous example of grand French Art Nouveau architecture, designed by Charles Dalmas. You can also admire the opulent villas and upscale boutiques. The boulevard extends from the new Palais des Festivals to the lovely “La Roseraie” park at the Square du 8 Mai 1945, with splendid private beaches on the sandy shoreline. Along this stretch, the beachfront promenade is a great place for strolling and people-watching. The promenade is appreciated for its magnificent views of the gulf and the Lérins Islands in the distance of the Mediterranean Sea.

Beyond La Roseraie park is the idyllic Port Pierre Canto, with its rows of luxury yachts docked at the harbor. Also within walking distance is another harbor, the Port de la Pointe Croisette, the departure point for regattas organized by the Yacht Club of Cannes. The yacht club also has a sailing school. Another spot for water sports enthusiasts and sunbathers is the nearby Port Palm Beach, a quiet public beach on the western side of Pointe Croisette with a snack bar and restroom facilities. 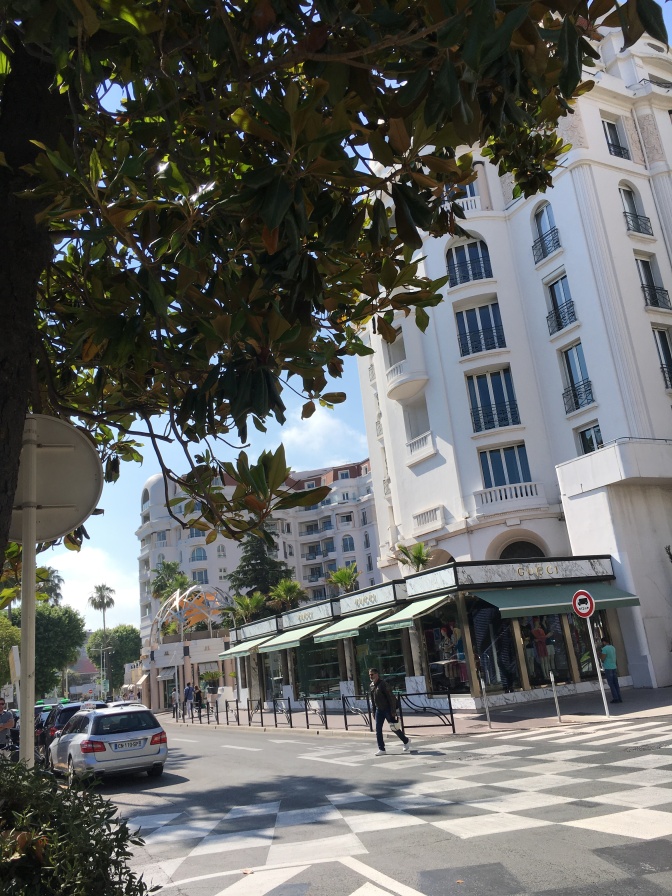 Established back in 1907, the Casino Croisette is France’s most highly frequented casino. And its location – inside the Palais des Festivals, where much of the International Film Festival takes place – is an attraction itself. Also, it’s a one-stop shop with a restaurant and the popular nightclub, Le Jimmyz Club; but remember to dress the part – men are required to wear jackets.

The Palais des Festivals et des Congrès is the venue of the Riviera’s most glamorous red-carpet affair, the Cannes Film Festival. Designed by the architects Bennett and Druet, the building was completed in 1982 and is used for events, conferences and festivals year round. In addition to the film festival, the building also hosts the G20 Summit, the international music trade show MIDEM, and the MIPTV (International Television Programme Market) events. The Palais des Festivals has 25 000 square meters of space for exhibitions as well as numerous rooms and auditoriums equipped with sophisticated sound and lighting systems. The impressive complex of buildings features state-of-the-art technical apparatus, including sound studios, simultaneous translation arrangements, audio-visual equipment, and large projectors. There is also a restaurant on site. Since 2009, the building has been continually modernized. 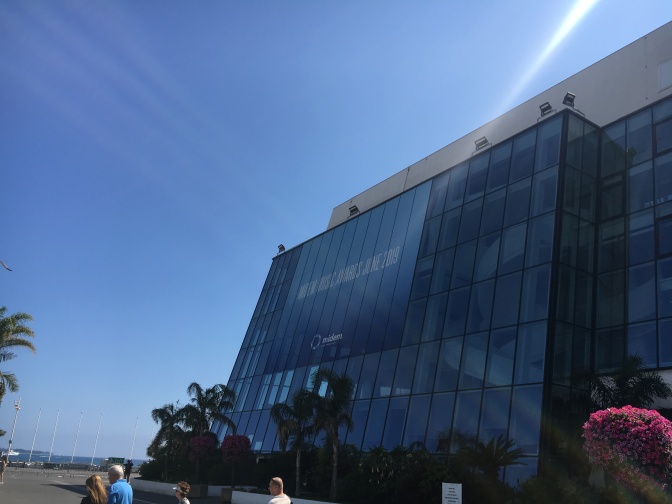 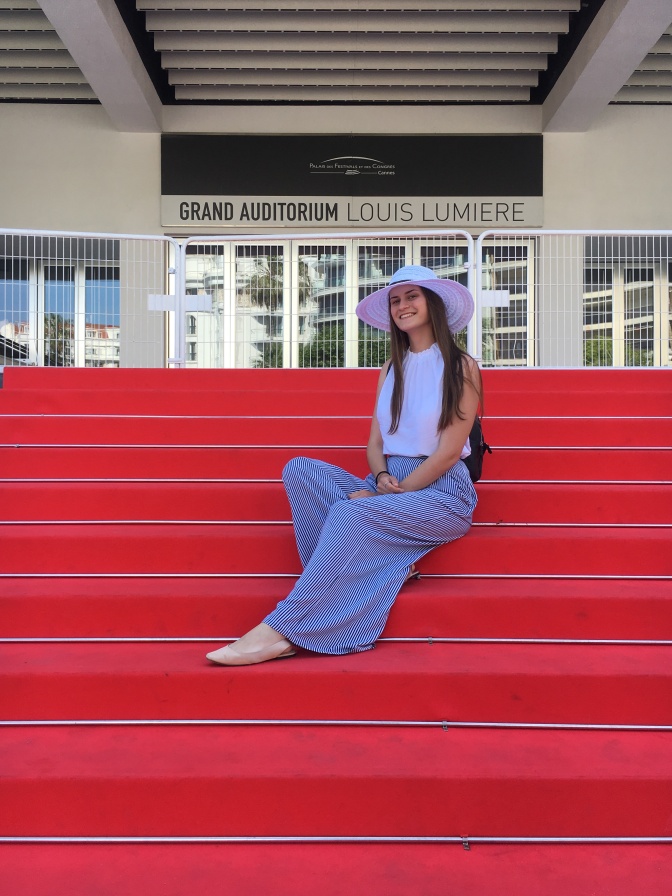 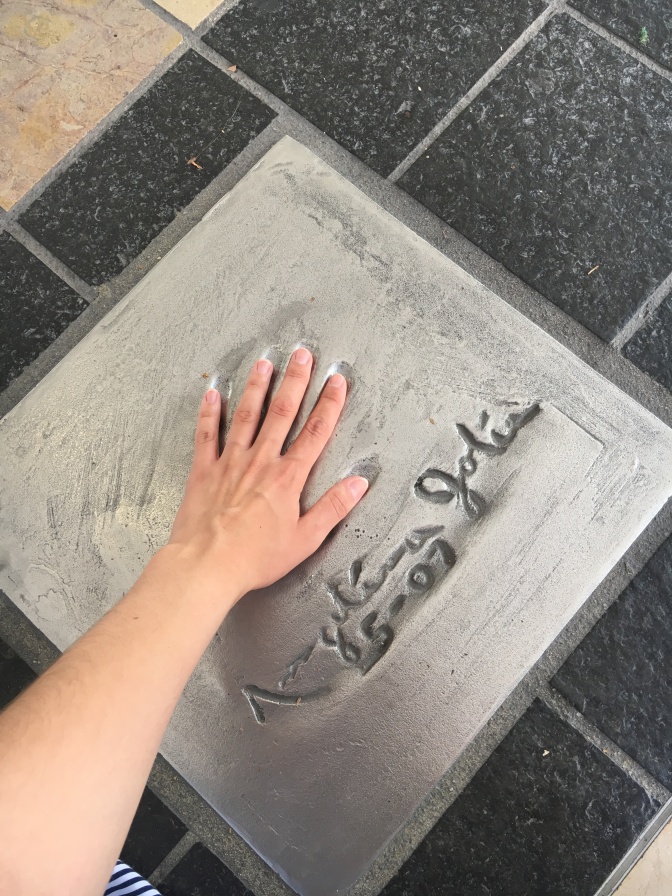 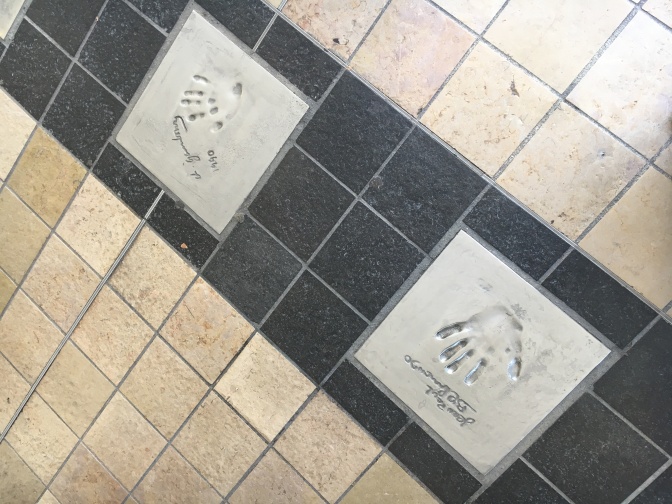 For high-end shopping, you’ll want to head to Rue d’Antibes, a road that runs parallel to La Croisette but lies a few blocks inland. You’ll find designers like MaxMara, Agnes B and Missoni among other shops that sell perfume and jewelry and pastries. If you don’t want to buy anything, you don’t have to: Window-shopping and people-watching are nearly as enjoyable as credit card-swiping, but without all that buyer’s remorse.

The French may call window shopping ‘licking the windows’ (lécher les vitrines), but there’s no need to actually do anything other than look. Either walk down the rue Meynadier to gaze at the beautiful 18th-century houses that have been transformed into small boutiques – selling everything from trendy and (relatively inexpensive) clothing to wine and cheese; recent travelers even say that the macaroons at L’Atelier Jean-Luc Pelé (at No. 36) are absolutely not to be missed – or head to the rue d’Antibes for high-end gazing. Some of the most expensive shops in Cannes are concentrated in this small area, along with all the best designer stores and some lovely chocolatiers.

& also a few buildings to show you the local architecture, hih 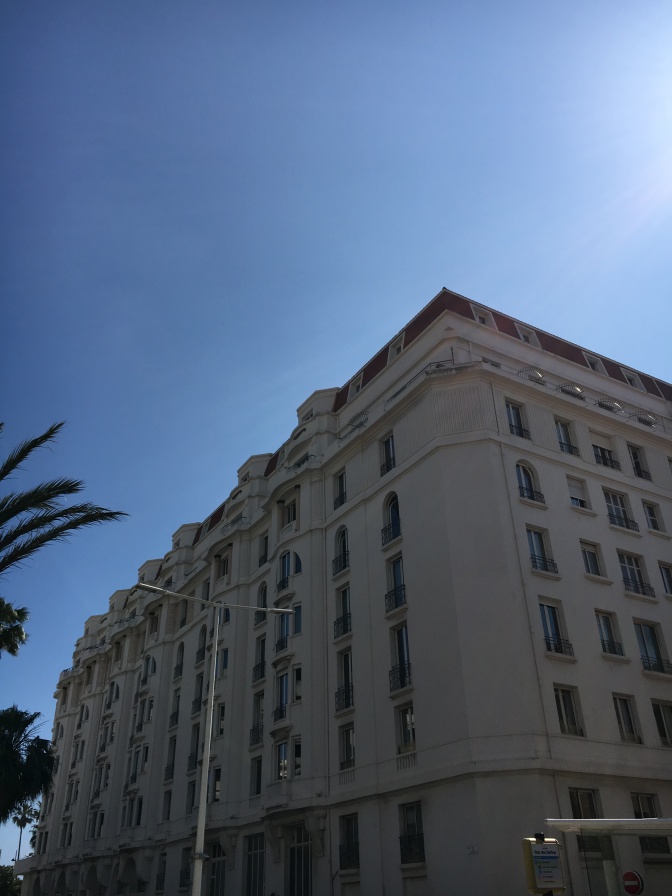 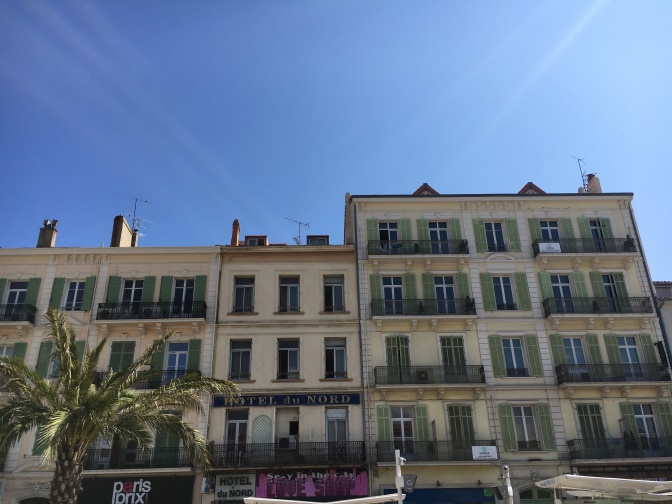 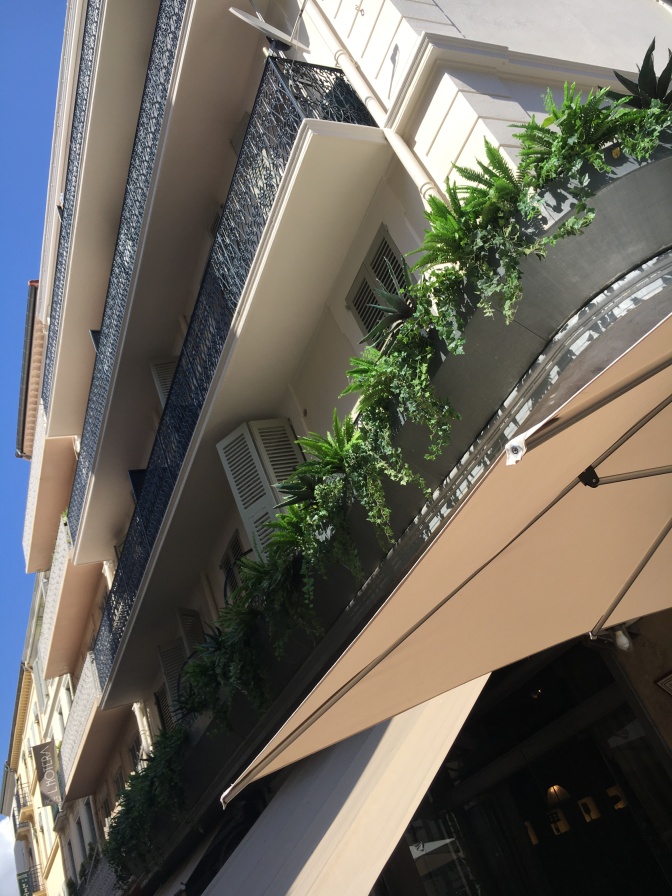 Forville Market is one of the highlights of Cannes. It’s open daily (except Mondays, when the antique flea market is in the same location) and you can wander around the stalls, trying tempting things to eat and drink. It has everything: fresh fish, seafood, delicious meats, seasonal fruit and vegetables and the local chickpea pancake, socca. While you might choose to buy a picnic or some lunch, it isn’t necessary to buy a thing and the samples are free.

Emblematic of Cannes’ Mediterranean scenery, the Vieux Port (Old Port) lies below the historic Le Suquet quarter. The Vieux Port, also known as Port Cannes I, is located near the Gare Maritime (Marine Railway Station) that was built in 1957. Besides its use as a dock for yachts and other sailboats, the Vieux Port is the launching point for the Royal Regatta. North of the port are the picturesque Allées de la Liberté, narrow ancient alleys lined with shady plane trees. In the mornings the colorful Marché aux Fleurs (Flower Market) is held here.

Cannes is famous for its fine sandy beaches, with gorgeous views and calm Mediterranean waters ideal for bathing. Including the nearby îles de Lérin and Estérel coastline, there are seven kilometers of beach property in Cannes. With so many options, there is something for every visitor. While many of the beaches in Cannes are private property owned by hotels, there are several beaches open to the public. These include the Macé Beach and the Zamenhof Beach, located off the Boulevard de la Croisette. These beaches charge a small fee for use of the lounge chairs and parasols. Also available for public use (and free of charge) are the Plage de la Casino along the Boulevard de la Croisette; La Bocca Beach, a quiet beach with gorgeous views and golden sand; the Plages du Midi, a long sandy beach near the center of Cannes; and Mouré Rouge Beach near the fishing ports. The lesser-known Les Rochers beach is the best choice for snorkeling.

Palm Beach, which overlooks the Island of Sainte-Marguerite, is particularly popular and is situated at the easternmost of the Croisette. It’s good for kids as it has a gentle slope into the sea and is a great place to take in a more natural side of Cannes.

As an exclusive seaside resort town, Cannes also has upscale private beaches that require entrance fees. Fashionable private beaches along the Boulevard de la Croisette include the Plage Croisette, with a fancy restaurant that serves Provençal cuisine; the Royal Plage that has a casual restaurant with a pleasant patio area; CBeach, with a restaurant focused on seafood; and Bâoli Beach, which boasts an exceptional gastronomic restaurant. Tucked away in a quiet environment near the Port Canto, Bijou Plage has a stellar fine-dining restaurant with an outdoor terrace overlooking the sea, the Lerins Islands, and the Esterel Mountains. Maema Plage, on the Boulevard du Midi Jean Hibert, offers outdoor dining with musical entertainment in the evenings. All of the private beaches have excellent facilities as well as lounge chairs and parasols available for rent, allowing sunbathers to enjoy a pampering and relaxing experience. 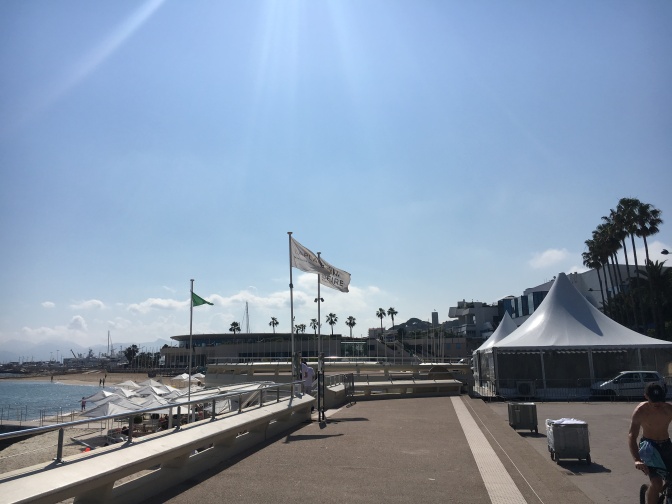 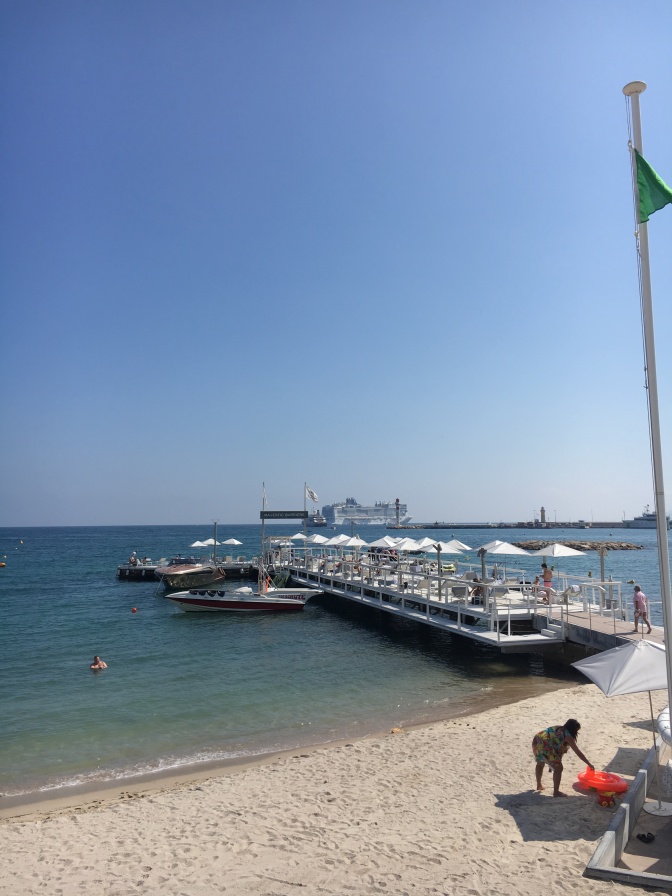 West of the harbour is Cannes’ original hillside settlement, where the pattern of the scurrying little streets hasn’t changed in hundreds of years. Before the great and filthy rich discovered it, Cannes was a small fishing village concentrated on Suquet hill. This rises sharply back from the port. Fishermen and associated folk lived doubtless tough lives in the labyrinth of sinuous streetlets and steep stairways. The labyrinth survives – now colonised by bars, restaurants and shops selling mainly inessentials. If you’re out to dinner in the evening chances are you’ll spend at least some time on Rue Sainte-Antoine, which twists its way up the hill between old fisherman’s houses. You can let your curiosity take over and climb the stairways, slowly making your way up past ochre-painted walls and bougainvillea blossoms, until you get to Place de la Castre. There you can stand at the terraced garden next to Notre-Dame d’Espérance and see the harbour, the Palais des Festivals and the arc of La Croisette all below.

Le Suquet, however, retains a certain atmosphere. Go in the morning or very late at night and get a sense of the place and of the close-knittedness of lives lived there.

At the top of the Suquet Hill, this fine 11th-century pile was once the land-based HQ of the monks of Lérins. Now the museum is a diverting cache of eclectic collections – from archaeo-material to musical instruments and a first-class assembly of ethnic art and artefacts from the five continents. It’s well worth a look, especially on the first Sunday of the month from November to March, when it’s free. And the views from the top of the tower with the whole city below surrounded by the blue sea and the Lérins Islands below are outstanding, if you can manage the 109 steps. 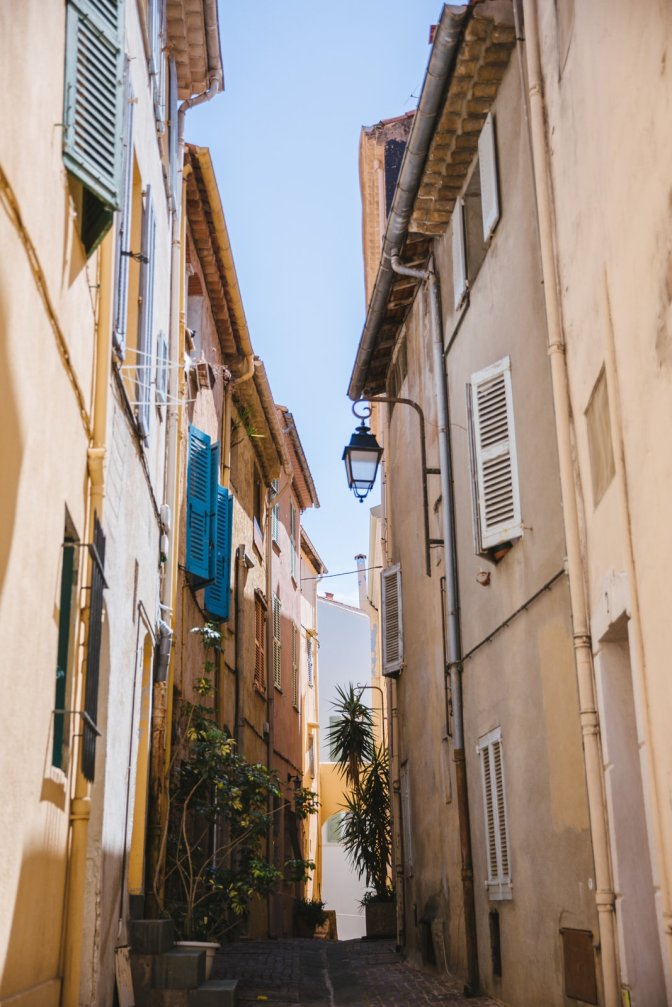 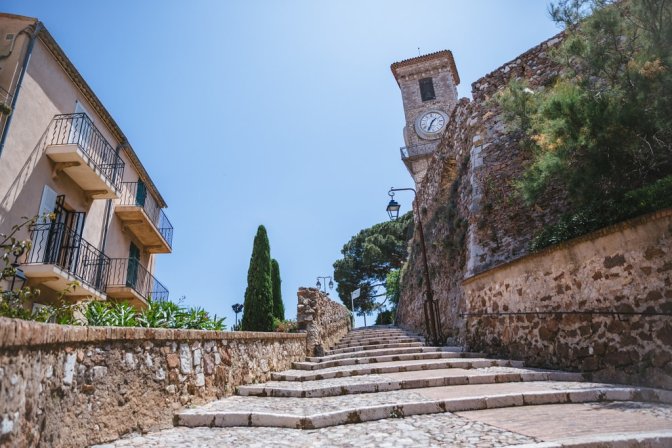 Following narrow streets down to the market of ForviIle and through the plane tree lined streets of Liberté, one arrives back at sea level.