Cool neat water, highest wooden lookout in the world, big sport events, meridional charakter of the entire Carinthia region and the largest beach in Austria all contribute to the fact that Wörthersee is considered as the Austrian Carribean.

It’s about 16.5km long, 1.5km wide and incredibly rich in historical chateaus and castles. However, that’s not the only thing that makes this place so attractive. The lake is also very well known to the sportsmen and music lovers, because events as IronMan, Halbmarathon, Masters of Dirt and beach volleyball championships take place there, as well as various festivals and concerts. If you won’t catch any of these events, nevermind, it’s worth of spending there at least a weekend thanks to the clean environment, quality services, beautiful nature and amazing architecture nonetheless.

Wörthersee is surrounded by hills in a plain called Klagenfurter Becken. The lake and its surroundings were shaped (or even created) by glaciers during the last ice age. The deepest point of the lake is 85 metres under the lake level. In the past, the water quality was rather bad (eutrophic) especially during the summers, but this issue gradually decreased since sewages were controlled more strictly since the 1970s. Since around 2000, the water quality is exceptionally high and before the highest touristic season is even safe to drink the water. 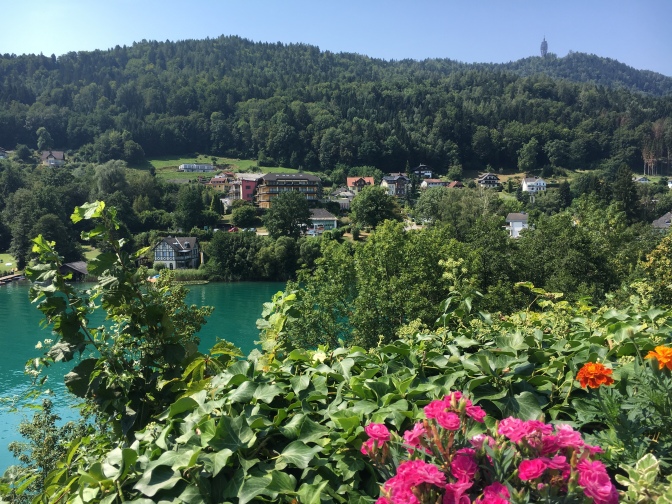 Lake Wörthersee is shielded against strong winds by surrounding mountains. A couple of minor creeks carry water into the lake, there is only one little river from where water leaves. This relative tranquillity means that the highest water levels down to 8 metres can get up to 26 degrees warm during the summer season. As a result is this place most likely to be the Austria’s most popular and most famous summer location, mainly for Austrians, Germans, Dutchies and Slovaks.

In winter is this part of the Carinthia region less popular than its other parts. Some spots usually freezs in January, but all of the lake freezes only in very cold winters – once every couple of years, therefore skating nor curling is not possible all the time. In other times of the year, however, many options are available. Even the boat tours! You can enjoy the scheduled trips aboard the MS Kärnten, MS Klagenfurt, MS Velden or DS Thalia. They also offer Christmas rides. I’d like to try one, drinking mulled wine and eating some Austrian specialties (my beloved Wiener Schnitzel, oh Lord) aboard while looking at the white forests and snow falling everywhere around might me interesting! 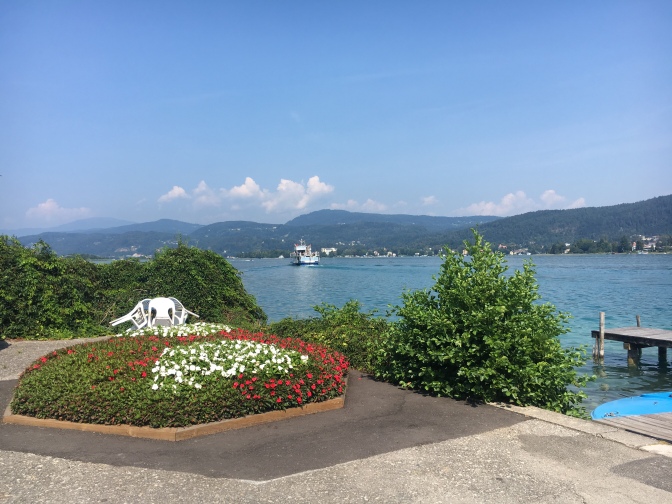 Lake Wörthersee has three islands: The Blumeninsel (Island of Flowers, clearly a shameless euphemism), the Kapuzinerinsel (Island of Capuchins) and the ex-island of Maria Wörth, which was artificially linked with the main land and therefore is qualifies only as a peninsula these days.

In Maria Wörth itself is situated a church dedicated to the Virgin Mary, built in the late 800s, which soon achieved a considerable reputation as a mission centre on the Wörthersee and became a special place of devotion. 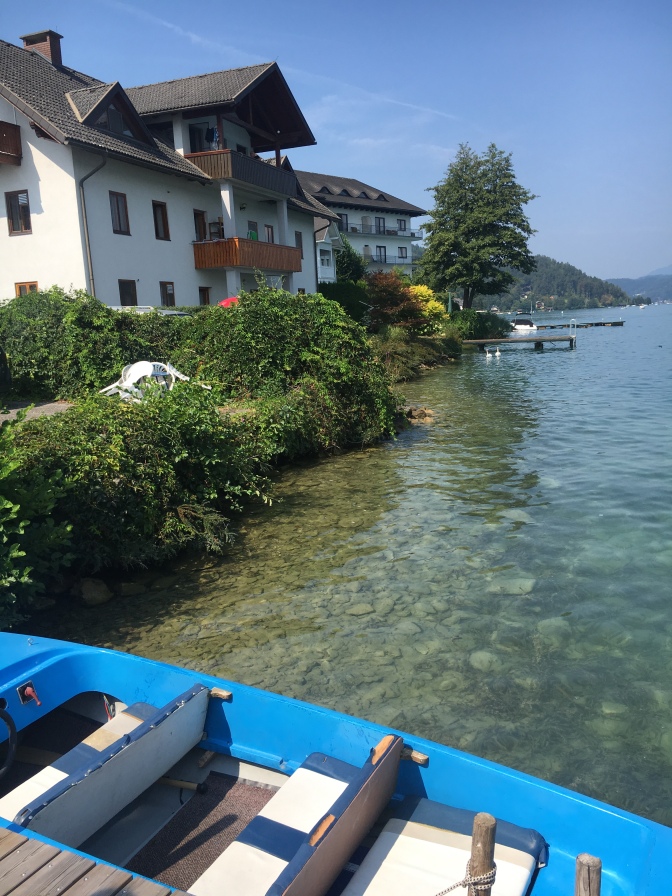 The former collegiate church rises impressively from the midst of the cemetery to some 20 metres above the lake levek on the highest plateau of the rocky island. A covered walkway leads up to the church, and the graveyard with its elaborate wrought iron grave crosses is entered via a late Gothic semi-circular arch. All that remains from the former Romanesque church is its beautiful south portal with three recesses from the 12th century, small sections of the nave and the crypt. To the right of the portal can be seen a late Gothic structure with an alcove for offerings. In this, there is a relief which is thought to show St. Primus and a coat of arms of the master builder Lienhart Märtl with the year 1540. The master builder Märtl had been working here since 1517 and he completed the Gothic building in 1540. A fresco of the Mount of Olives dating from 1521 adorns the south face. An enormous St. Christopher from the year 1658 looks down on the many visitors from the exterior west wall of this dignified sacred building. The interior of the church is divided into a twin nave with mighty buttresses. The two Gothic choirs are contained within five sides of an octagon. In the main choir which is elevated by five steps, there is simple star rib vaulting with semi-circular arches and keystones. The church has a refined and ornate appearance. In the high choir, the late Gothic icon of the Madonna, originating from around 1460, stands on the Baroque high altar of 1658. It is flanked by the statues of St. Primus and St. Felician. In the upper part of the high choir, a painting shows the Coronation of Mary in heaven. On the south wall of the choir is another miraculous image from Italy, consecrated by Pope Paul II in 1469. Two Gothic panels also hang here, representing the Church Fathers Gregory and Jerome; the panels are from the former Gothic winged altar, which had to make way for the Baroque in the era of the Jesuits. 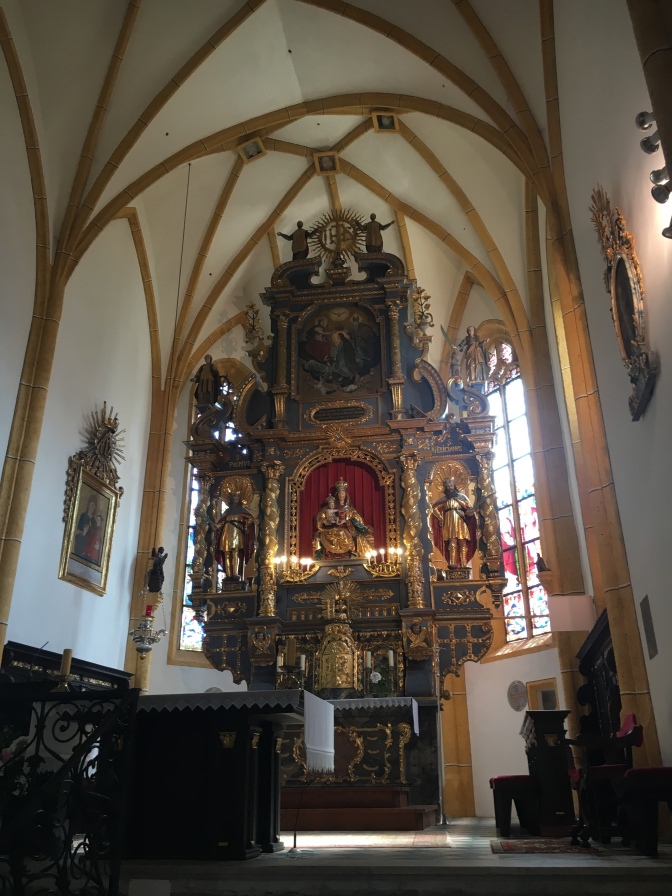 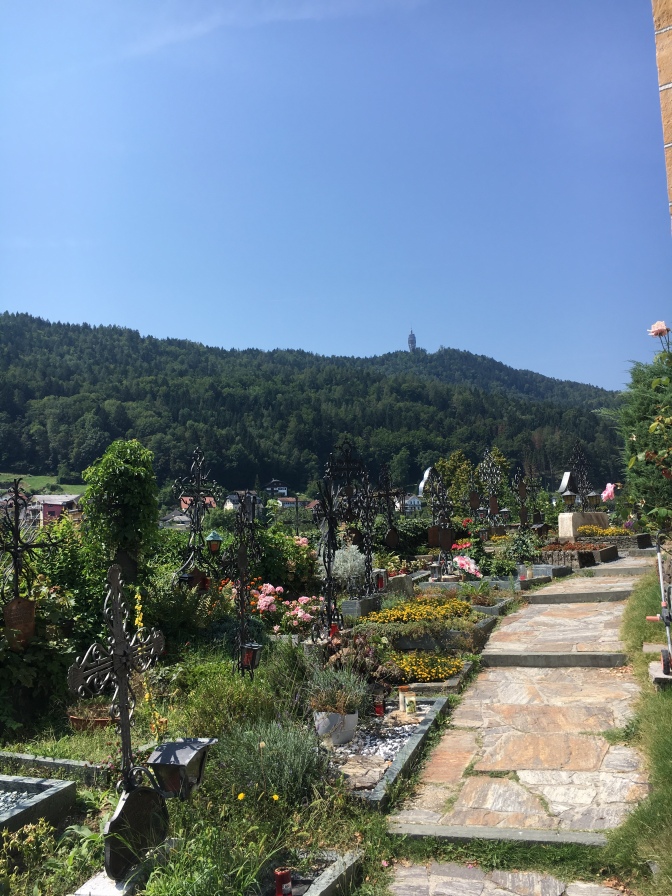 Right above the Wörthersee is situated the earlier mentioned wooden lookout tower. Its name is Pyramidenkogel, and here’s an article that I dedicated to it, you’ll find many useful information there: Pyramidenkogel.

All in all, Wörthersee is definitely one of the most must-have places to see in Austria. Basically whole Carinthia region is. However, if you don’t fancy slow walks but prefer something more tough, Alpine peaks are located within a hand’s reach, only like 20 minutes of car ride. Therefore I’d dare to recommend it more to people who prefer more tranquil lifestyle, because that’s basically what this lake offers you: a mound of peace, serenity and silence. Don’t ruin your image of this place with constant rush!

I haven’t had time to visit another towns around, but I’ve heard some pretty positive feedback about Velden, too. I’d definitely like to revisit this place and see more once, one never knows when I’ll get bored and decide to come here again!

source of a part of the historical insert: https://www.maria-woerth.info/en/the-history/

3 thoughts on “Carribean in Austria: Wörthersee!”