If you have ever wanted to visit the town that Rembrandt van Rijn was born in, then you need to head to Leiden.

Leiden is a compact, historic city with a superb location: it’s nestled right between Amsterdam and Den Haag – Rotterdam. The Dutch beach and the world renowned tulip area Keukenhof are a beautiful bike ride away. Compared to the other Dutch cities Leiden may be a small convention city, but that’s also a part of its irresistible charm. Where else in the world would you find 13 museums, hotels and meeting venues within walking distance? Oh, and have I mentioned the 28 kilometres of canals criss-crossing the impressive city centre? 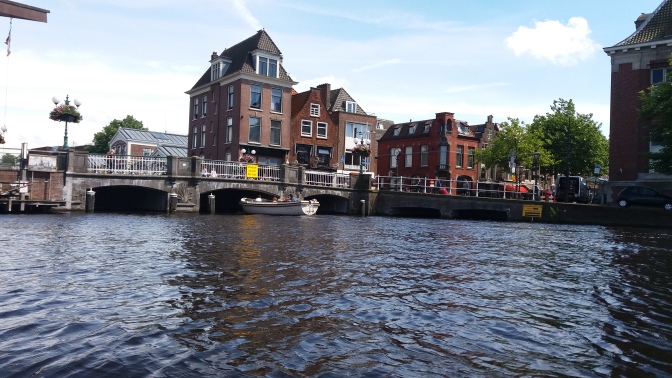 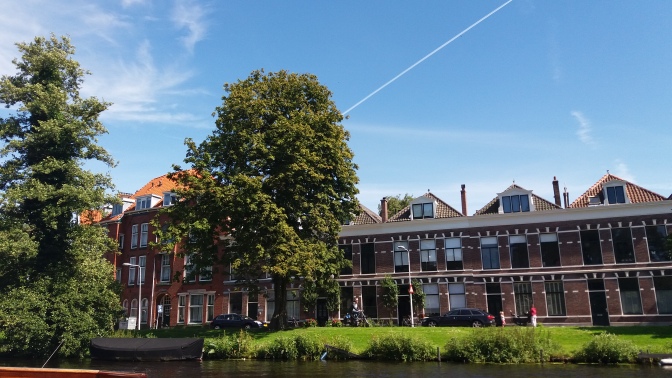 Leiden’s inner city is full of waterways and bridges, making it the perfect destination to explore on foot or by boat. And if that isn’t enough of a reason to visit, then here are some more:

Leiden’s market has been held for over 900 years, firstly starting with the sale of butter, cheese, fish and cereals. Today the market stalls are gathered twice a week around the original spots on the Botermarkt, the Vismarkt, the Aalmarkt and the Nieuwe Rijn, along the canal. It’s here, in the very heart of the city where you will find both local and exotic food. Be sure to visit the market with an empty stomach because it’s very hard to resist the temptation.

A journey trough the human body? Why not! In Corpus, a 35-metre-tall body, you can travel all the way up from knee to brain and learn how the human body works. It’s located near the Oegstgeest village, considered a city quarter now.

These first two recommendations were a bit off the trail, but these several spots are one after another, with the gauge point at the Leiden Centraal station:

Stedelijk Molenmuseum de Valk is a beautiful authentic rampart mill from 1743. It’s got  seven floors which are all accessible to the public, it’s alltogether 29 metres high and it’s the only mill museum left out of the 19 original mills that once stood on the ramparts of Leiden.

On the ground floor of the museum you’ll have insight on the way millers lived in the Netherlands. A living room dating from the 19th century has been virtually untouched over the years. The kitchen is connected to the living room. There are blue tiles that are at least 200 years old, and on the walls are family portraits and paintings. You can also find a horse mill and the Van Rhijn collection here, or you can learn about the techniques of million throughout the past and the miller’s craft in the 20th century.

Of all the eight gates of Leiden eventually two remained: the Morspoort and the Zijlpoort. The Morspoort formerly served as the western gate of the city of Leiden. In 1611 there was already a Morspoort, however, this one was not of stone but of wood and therefore not used for long periods. Eventually in 1669 the city government decided to replace the wooden gate to a stone gate. Since then, the location was virtually untouched.

Molen De Put is another enchanting and historical windmill. Windmills are a fundamental part of Leiden’s image as a town. Here you’ll learn all about milling history and the significance of windmills in Dutch culture.

The original mill is dated as far back as 1619, and the first mill in 1640 was burnt down. After this occurrence, the mill was then rebuilt in 1729. This Mill, known as The Coornbloem / Cornflower / The Flour Mill (Walmolen), was again destroyed in 1817. Archaeologists later discovered in 1982 the foundation of the octagonal mill stronghold.

And in 1983, during the 25th anniversary, the Rhenish Mill foundation started with the idea to develop a mill at the old bastion. This concept was gradually achieved four decades later. The mill has a municipal monument status, and next to the mill is the Rembrandt Bridge, which was also designed in 1983.

Miller’s Son Rembrandt Harmenszoon van Rijn was born on July 15, 1606 in Leiden and is widely considered as one of the greatest Dutch painters of the 17th century. Although his parents registered him at the University of Leiden, he quickly chose for a life as a painter and produced between 300 and 400 paintings during his turbulent life. You’ve definitely heard of The Night Watch, The Return of the Prodigal Son, The Jewish Bride or a serie of The Anatomy paintings.

You’ll find this house on the Weddensteeg street, as well as a monument dedicated to him. 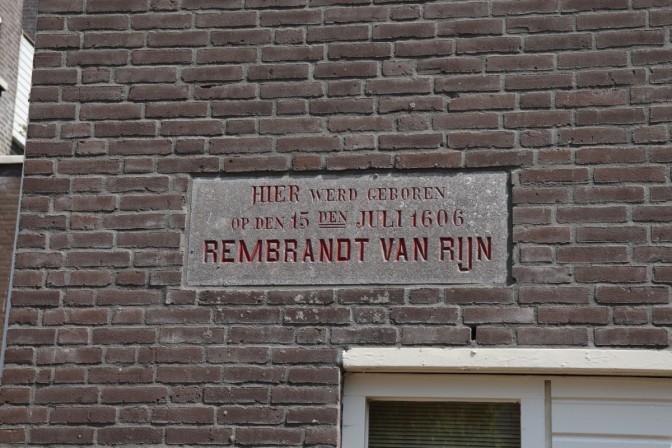 This gate was designed in 1645 by the city’s well-known architect Arent van ’s Gravesande. 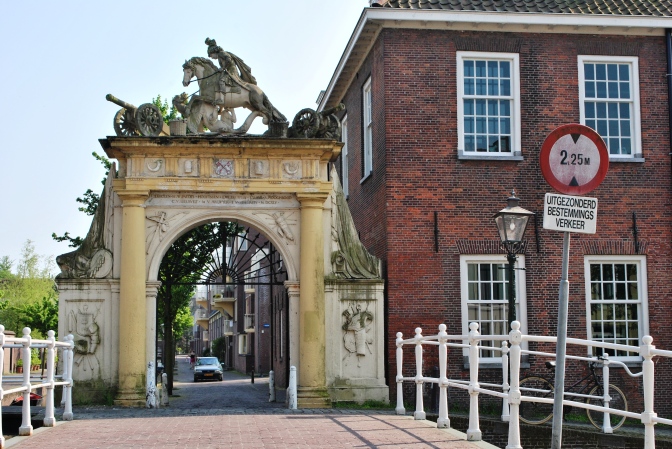 Following this path from De Doelenpoort to Pieterskerk you’ll spot a couple of Shakespeare’s poems written on random houses along the road. 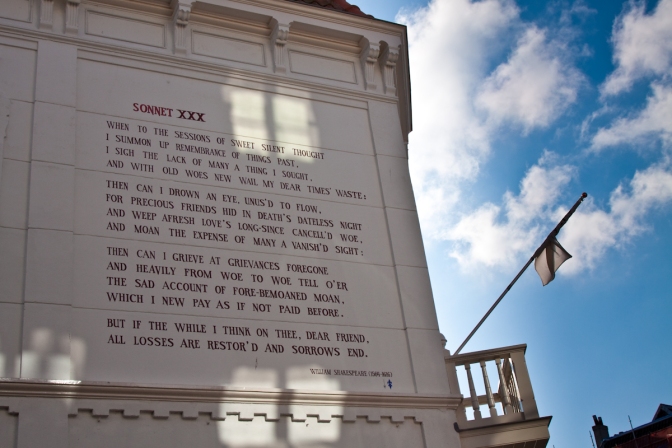 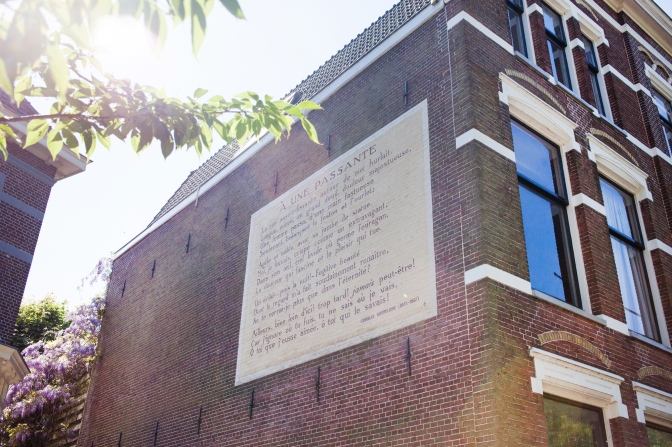 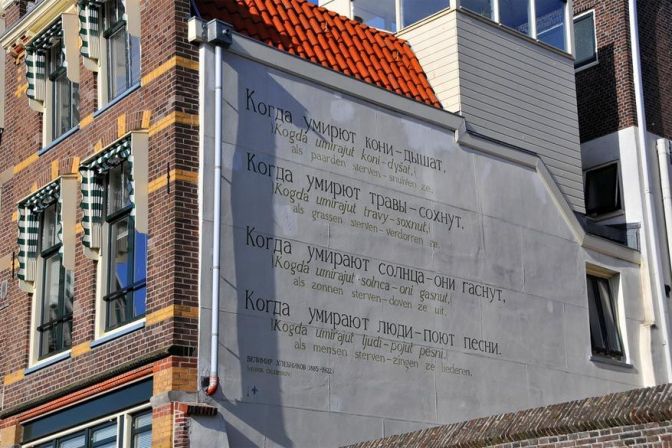 Pieterskerk (Saint Peter’s Church) is the oldest church in Leiden, built already around the 1100s. It was first used as the chapel of the counts of Holland and it’s located right next to the former workshop of the dig, Gravensteen. In the 13th century after the Counts moved elsewhere, it became a parish church which meant that common people could pray here.

The church is now a late-Gothic basilica. A cross basilica implies that the it’s been built in the shape of a cross. The walls are built of brick, what signifies that the architecture originated in the Flemish Gothic. The pillars and window panels are made of stones and sandstone.

Before 1811 it was used as a burial ground for many prominent people such as the Dutch theologian Jacobus Arminius, Herman Boerhaave, Jan Steen, Johannes de Laet or John Robinson.

not my photo, all right go to its owners – I just love it, I had to use it!

As you are already on your feet, why not to walk a little further to the living museum that is the Hortus Botanicus – the oldest botanical garden in the Netherlands, dating back already to the 16th century.

Carolus Clusius, prefect of the garden, came to Leiden in 1593 and set up an extensive collection of plants. You may have heard of Clusius, as he was the one who introduced the Netherlands to the tulip, something one wouldn’t have imagined the Dutch country without today.

The place is home to more than 10,000 species of plants from all over the world, so whether you’re a plant nerd, you want to relax or you just love nature, a trip to this wonderful garden is a certain must-have. 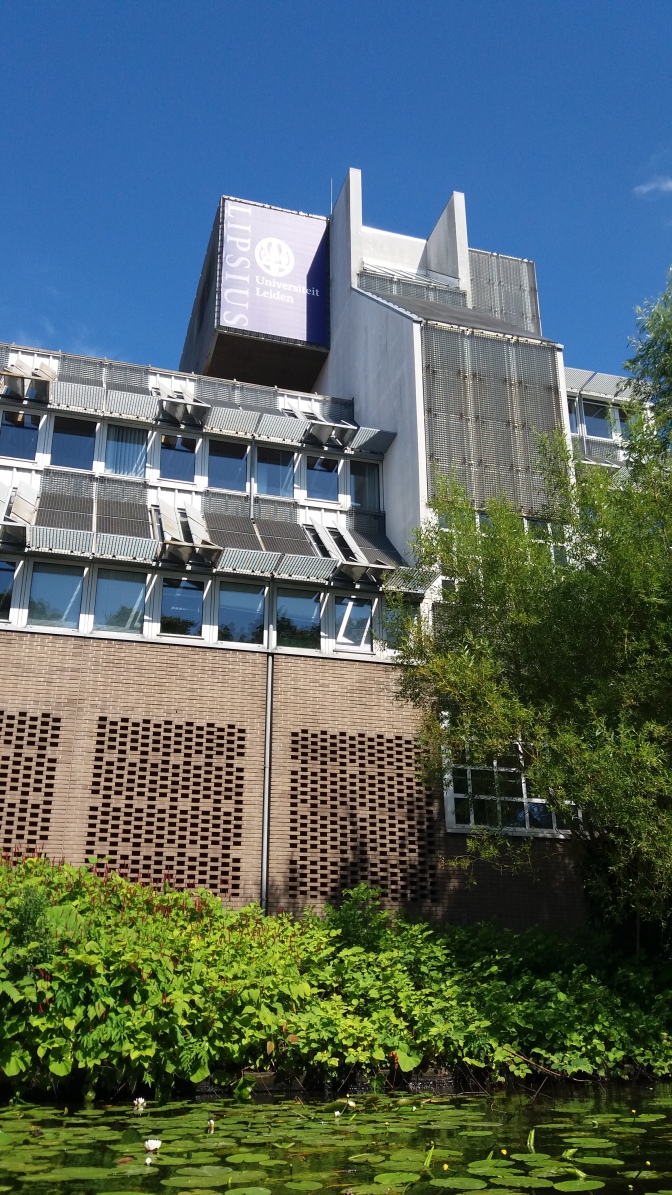 I didn’t go inside, but this is how it looks like from the water!

It had all started with an explosion of a moored gunpowder ship at the Rapenburg in 1807, which caused a massive deforestation at the Stone Barn. It took more than thirty years before this ruin turned into a park again.

In 1874 it was decided to erect a statue in the park of mayor Pieter Adriaansz van der Werff. The coats of arms on the three sides of the pedestal refer to the water boards Rijnland, Delfland and Schieland, where the fight for Leiden was conducted. The four bronze reliefs tell the story of the Siege of Leiden.

The castle is located on a very central location in the middle of the town and was built with the primary aim to provide the residents of Leiden protection in times of war. Walls are in averagely 6,2 metres high and 85 centimetres thick! It was built already in the 11th century and is one of the oldest castles in the Netherlands; nowadays it’s a true symbol of the city.

The name of this bridge, which dates back to 1642, says it all: for centuries it was the place where grain was traded. It was covered in 1834 to keep the grain dry. It’s a remarkable architectural feature and a national monument around which the Saturday market is held every week. 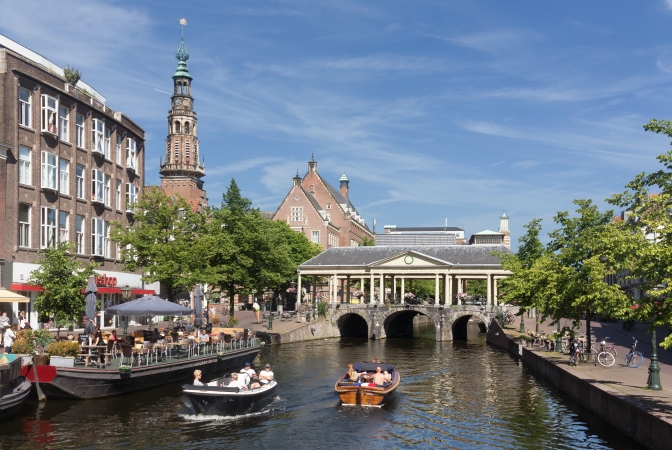 The Leiden City Hall at the Breestraat has already been there in the Middle Ages. In the late 16th century the building was given a new facade in Renaissance style, the fashion of that time. This would allow the government to show the new prosperity of the city. The city hall burned in 1929 almost completely. After this sad event it’s been rebuilt, but only partly.

The Hartebrug church is named after the bridge with the same name, that was previously located in front of the churche. The official name is “Our Lady of the Immaculate Conception.” Among the inhabitants of Leiden the church is also known as the Coeliekerk, to the Latin motto above the entrance: Hic Domus Dei est et Porta Coeli (This is the house of God and the gate to heaven). 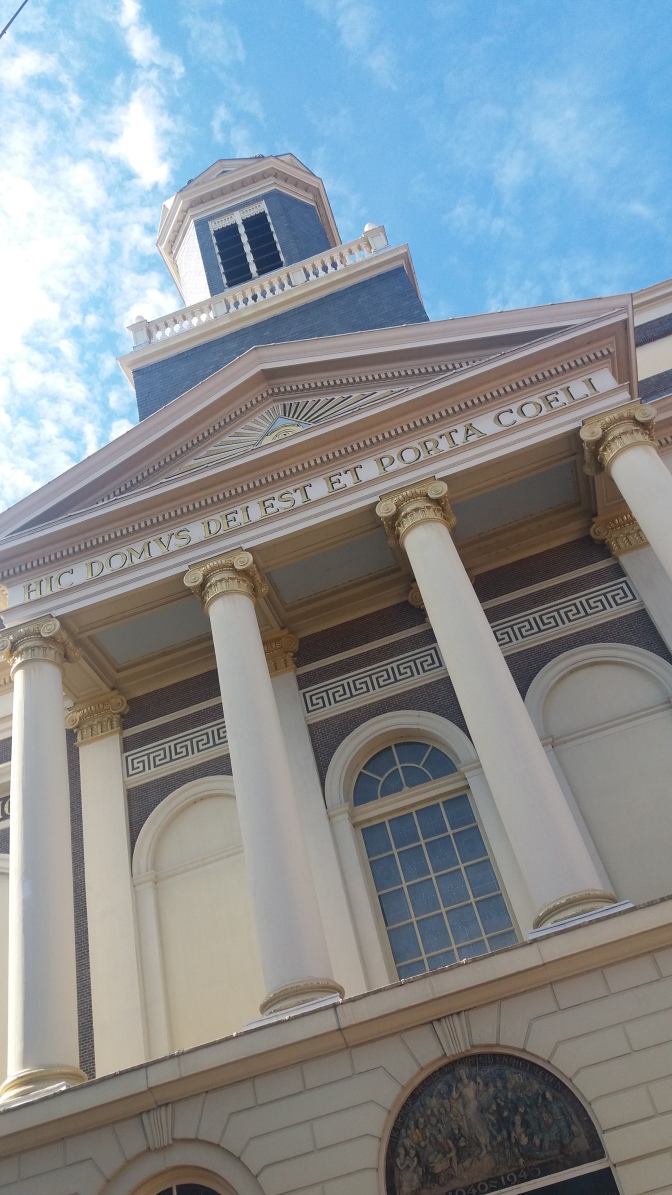 The Marekerk is built in the Dutch Classical style. The exterior features an interesting octagonal-shaped dome that is 55 meters high and a beautiful stone gate. Inside, true to Protestant values, the pulpit is the centerpiece of the church, being a literal copy of one in the Nieuwe Kerk in Haarlem. The pulpit and other wooden furnishings all date from 1650 and are made of solid oak, as well as the organ which was built by Pieter de Swart around 1560 for the Pieterskerk and movedhere in 1733.

It’s been renovated and enlarged several times, most recently in 1965. 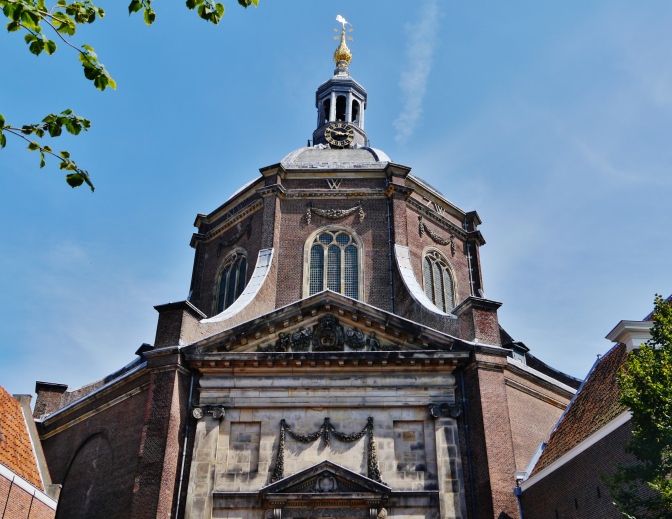 Boat trips are not my thing at all, but I’ve enjoyed Leiden so much so far, that I decided to try it and chose the Rembrandt Boat Tours company.

The Rembrandt Shipping Company (since 1950) runs from April to October daily boat trips round the city. However, on request it’s also possible to sail in the months of March and November. The boats leave from Blauwpoortshaven (at the Beestenmarkt), which is on the route from Leiden Central Station to the city centre.

The company’s boats are suited to all sorts of weather: they can be roofed over if necessary, or open when possible. As the boats have a unique low shape, they can go under all the low bridges of Leiden so that a beautiful view of Leiden is offered.

Basically what you can see from the boat: 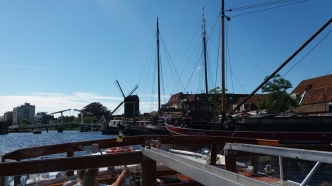 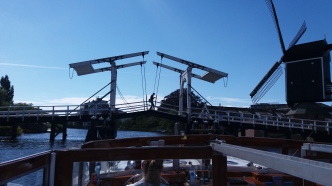 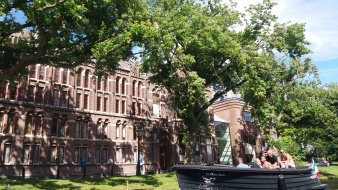 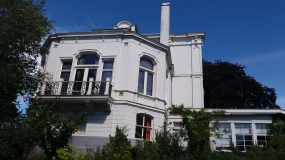 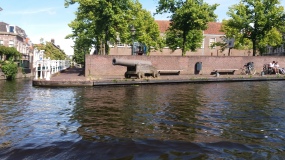 But you can also rent a boat, too! From a canoe to a barge, most rental companies in Leiden don’t require you to have a boat master’s certificate. You can just simply rent your barge at Bootjes en Broodjes (Boommarkt 19) and sail away.

The city of Leiden unfolds its appeal to many, not unlike the first dainty motions of a tulip in full bloom. Whether you are an artist, a horticultural Aficionado, a history buff or all of the above, making a visit here will definitely leave you with a lot of inspiration. And it might also leave you with enough great experiences to compel others to visit.

Would you consider visiting Leiden?